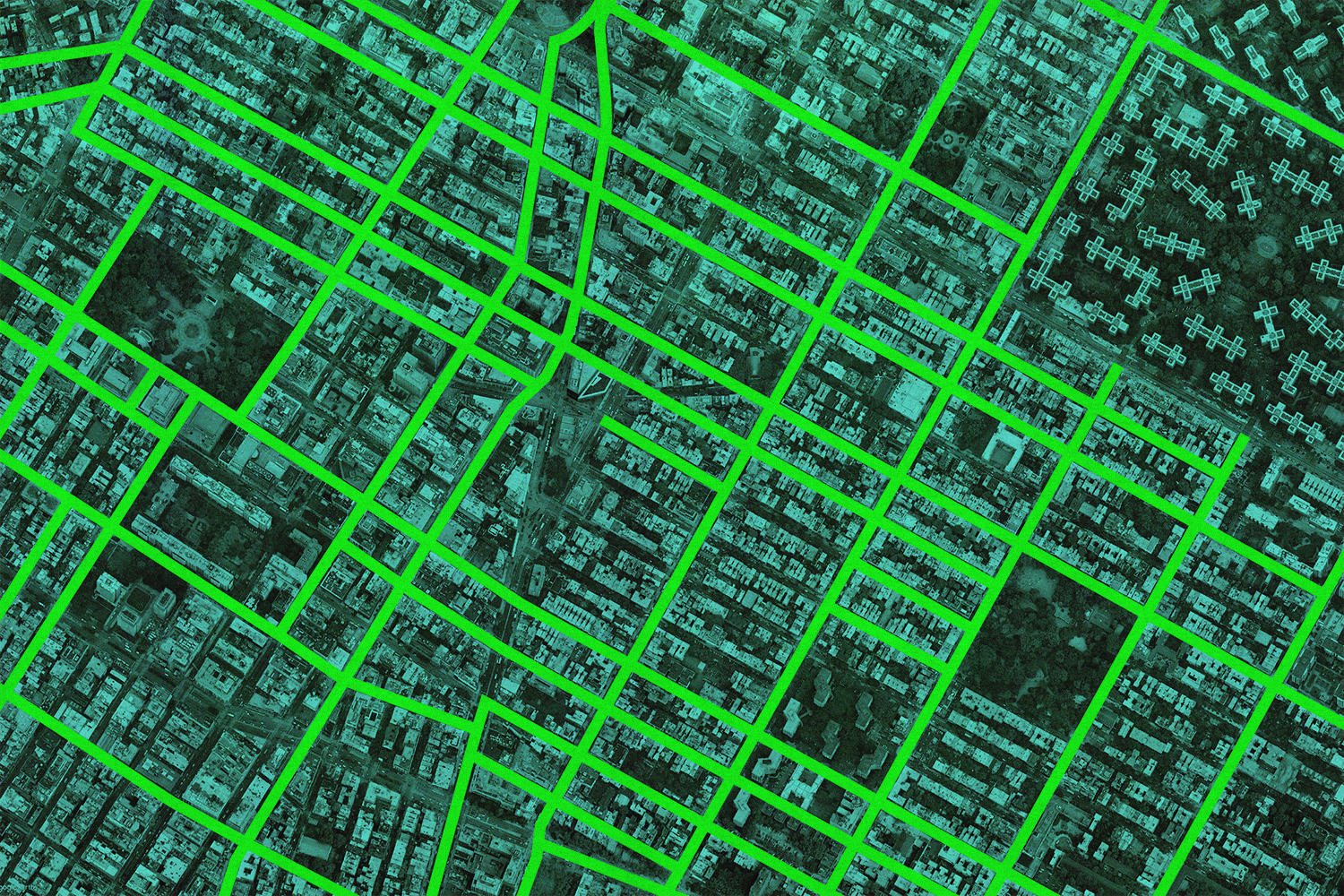 How might we transform New York City into a safer city for cyclists?

Having to move to different cities myself, I realized one of the first things I must figure out is how to move around an unfamiliar environment efficiently and safely. Bicycles are becoming one of the most popular options globally, whether to combat global warming, improve one's health, or just for recreational purposes. Owning a bike instead of paying a larger sum for a car is also a more sensible choice for newcomers like myself. The task of improving transport infrastructure usually fell on urban planners and civil engineers. As a designer, I could not stop thinking that there must be other ways to improve or solve transportation problems without going into lengthy legislative procedures or building costly hostile architecture. Hence, I took on this challenge using a human-centered and interdisciplinary approach to transform the behaviors of individuals for a desirable and sustainable change.

I began my research by searching for comments by experts and residents of New York City from news articles. Then I look into statistical data from NYC Department of Transportation and data visualization projects done by other designers on similar issues. I learned that while cycling's popularity have soared tremendously but the number of cyclists killed in a traffic accident were also at decade high. Despite the fact that huge progress were made in term of zoning and bike lane constructions, a lot of accidents were notably a result of human negligence which could not be fully addressed by physical changes.

cycling trips are made each day.

bikes were stolen from March to September 2020.

cyclists were killed on the streets of New York City in 2020.

My research for this project is separated into multiple stages to incrementally improve my understanding of the topic and adjust my research method accordingly. First, to better understand the problems that urban cyclists face, I interviewed four participants who reside in different highly populated cities in the United States. All of whom bike for various reasons and on different occasions. After I have reviewed the transcripts from my interview sessions, I then organize the findings in an aggregated empathy map. I prefer this method over mapping out each participant's thoughts separately because I learned that all my participants identify with a very focused group of people with similar thinking patterns. This way, I can quickly extract the pain points they shared, such as lack of suitable navigation and wayfinding system and lack of appropriate knowledge on biking best practices. I also learned that biking is the better way to connect with the city because it encourages your senses to interpret surrounding stimuli while covering a larger distance than walking. While biking offers them a great way to cope with stress and stay healthy, the journey is not without its flaws, as they often feel disappointed, anxious, and disoriented. 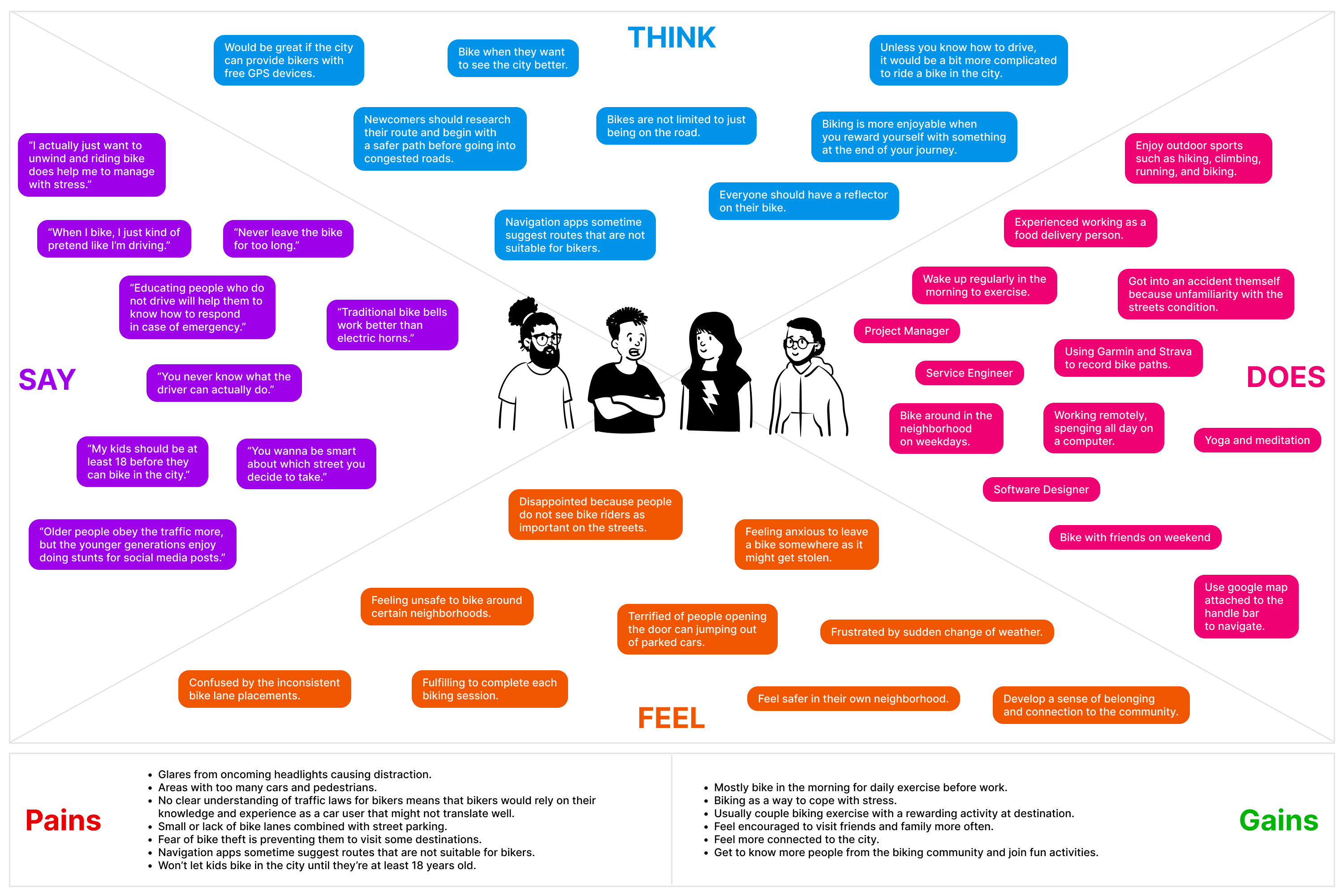 I then traveled to the center of Manhattan to observe cyclists, drivers, and pedestrians navigating around the space and amongst themselves. I walked up and down, spanning almost 30 blocks noticing many red-light runners, dangerous blind spots, and poor visibility at a large intersection. At a glance, bike lane placements and signage are also not as intuitive as they should be. Following the pandemic, we saw a rise in outdoor dining patios were constructed on sidewalks or even on some streets. Although it is necessary for those businesses to survive, this competition for space puts pressure on all users. Obstructed bike lanes and congested sidewalks mean that impatient cyclists and pedestrians are sometimes forced to come onto the street, leading to growing frustrations and accidents. When people are anxious, they become more reckless and break even more rules, and the streets would spiral into chaos. 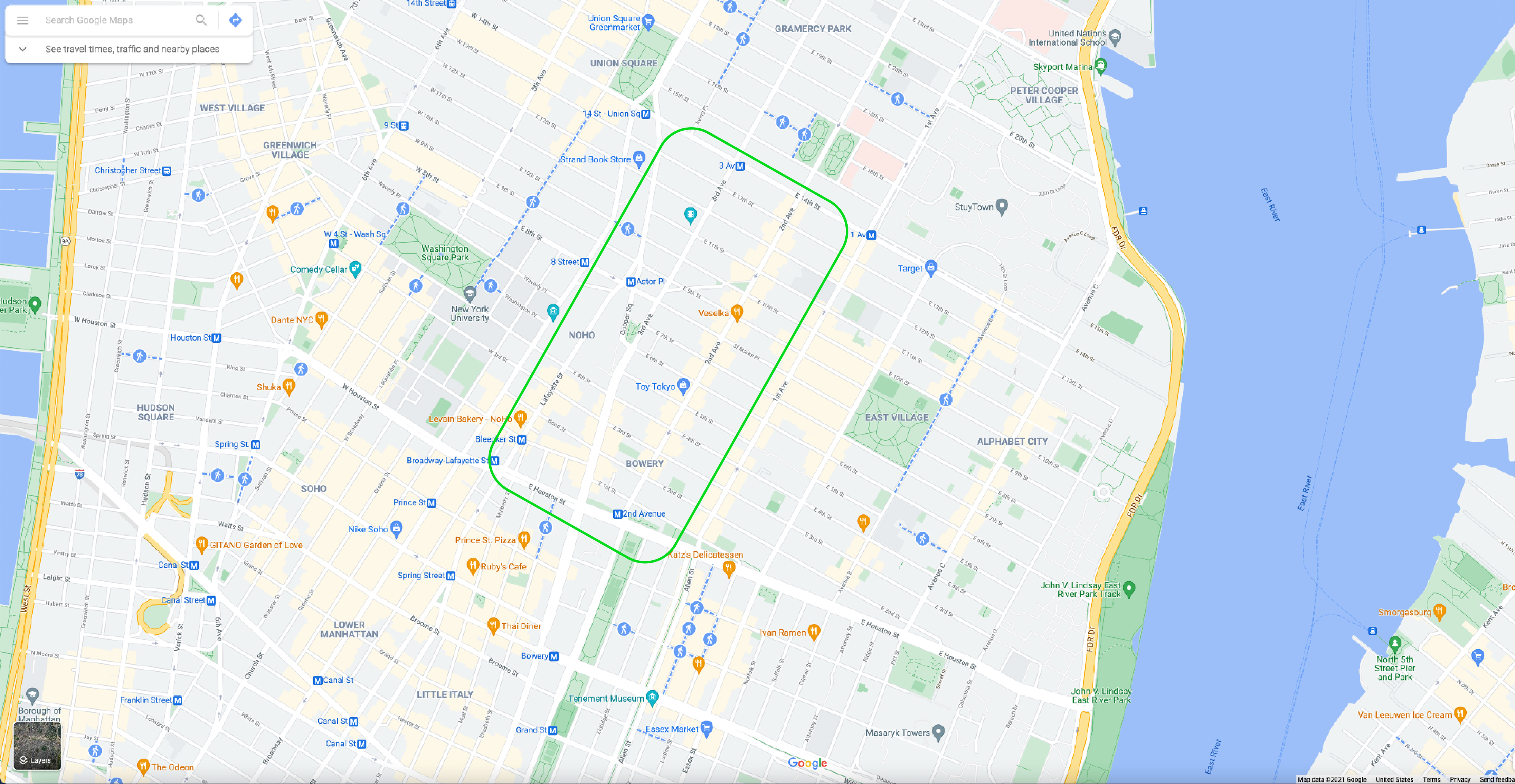 When I interviewed my last group of cyclists, I asked them to recall memories, which means that the insights I gained resulted from the accumulation of experience. They were effective at showing me the big picture, but to understand the specifics, I recruited three more cyclists. I gave each of them a week to record their biking experience in New York City using an action camera so that I could see exactly what they were seeing and how they responded to different circumstances. After they sent me the footage, I scheduled another interview with them to discuss what was going on in the video and clarify their intentions.

I learned that cyclists' behaviors are as unpredictable as any other occupants of the streets in New York City. This complex human interaction would not be understandable by only observation. When I noticed unexpected behavior patterns, I would note them down and discuss those specific moments with my participants for clarification. One interesting behavior I often witness is that the more experienced cyclists would leave the bike lane and join the cars on the main road whenever the bike lane is congested. Although it is not advisable to do so, it is a calculated risk they take, and their reasoning made a lot of sense. One cyclist even thinks it is safer to take a whole car lane because the drivers can always see you instead of constantly going in and out of bike lanes to avoid obstacles. These opinions can be grouped into communication issues, lack of predictability, and misaligned perspectives, which I further explored in the following research phase. 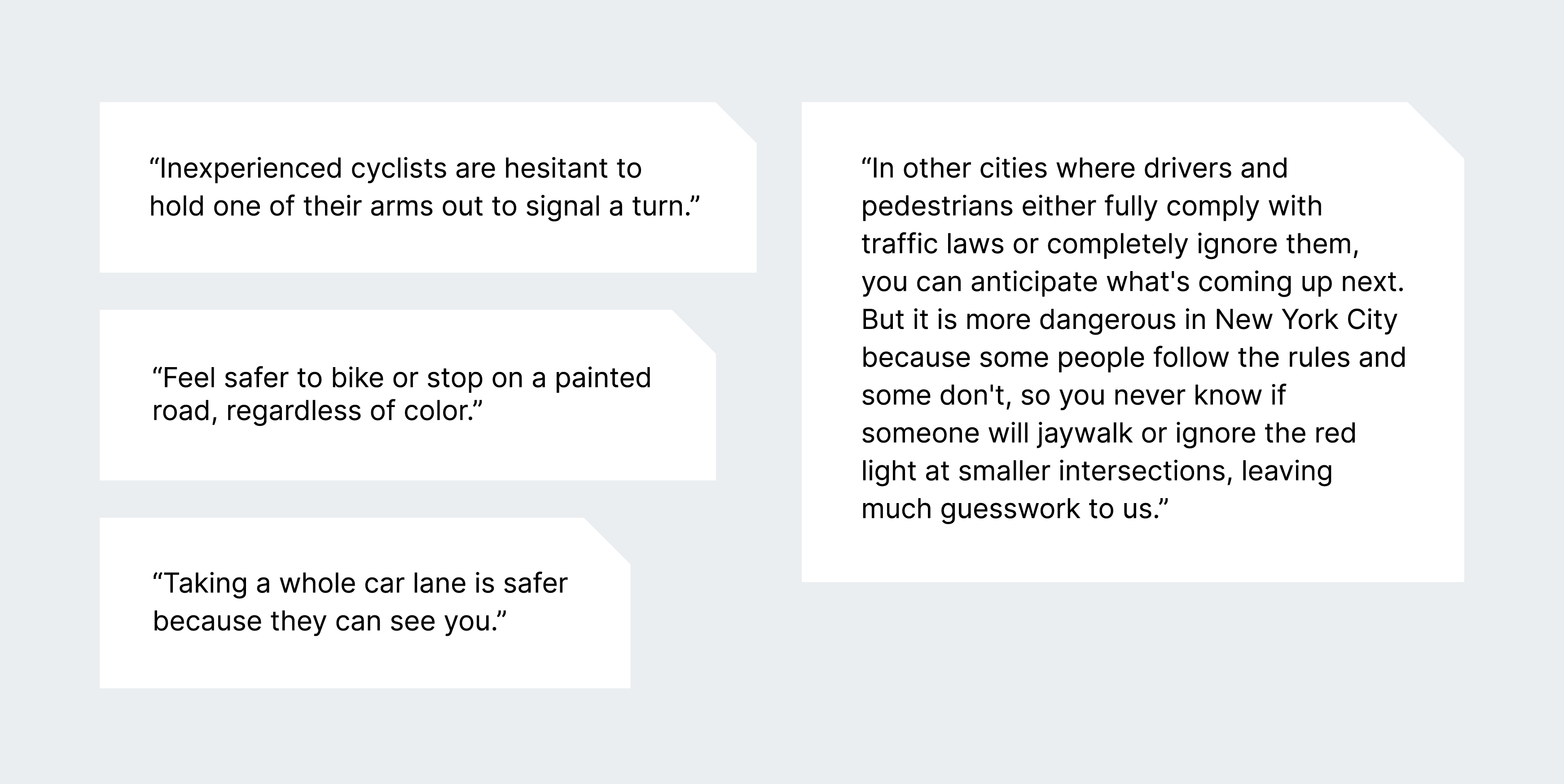 To stimulate more responses from my participants, I designed several cultural probes that ask for more active participation, followed by a self-documentation assignment and self-reflection on the activity. Instead of going back to the previous group for feedbacks, I recruited thirteen additional participants in the hope of discovering new opportunities that were not already mentioned. I designed the first probe to highlight decision-making conflicts and agreements between users. The second probe allows users to explicate and reflect on their personal biking experience. Lastly, the third probe asks them to respond and co-create a safer road for cyclists creatively. I distribute all of my probes to each individual via Milanote, which allows them to be honest with their thoughts while easily uploading supplementary materials to the worksheet. 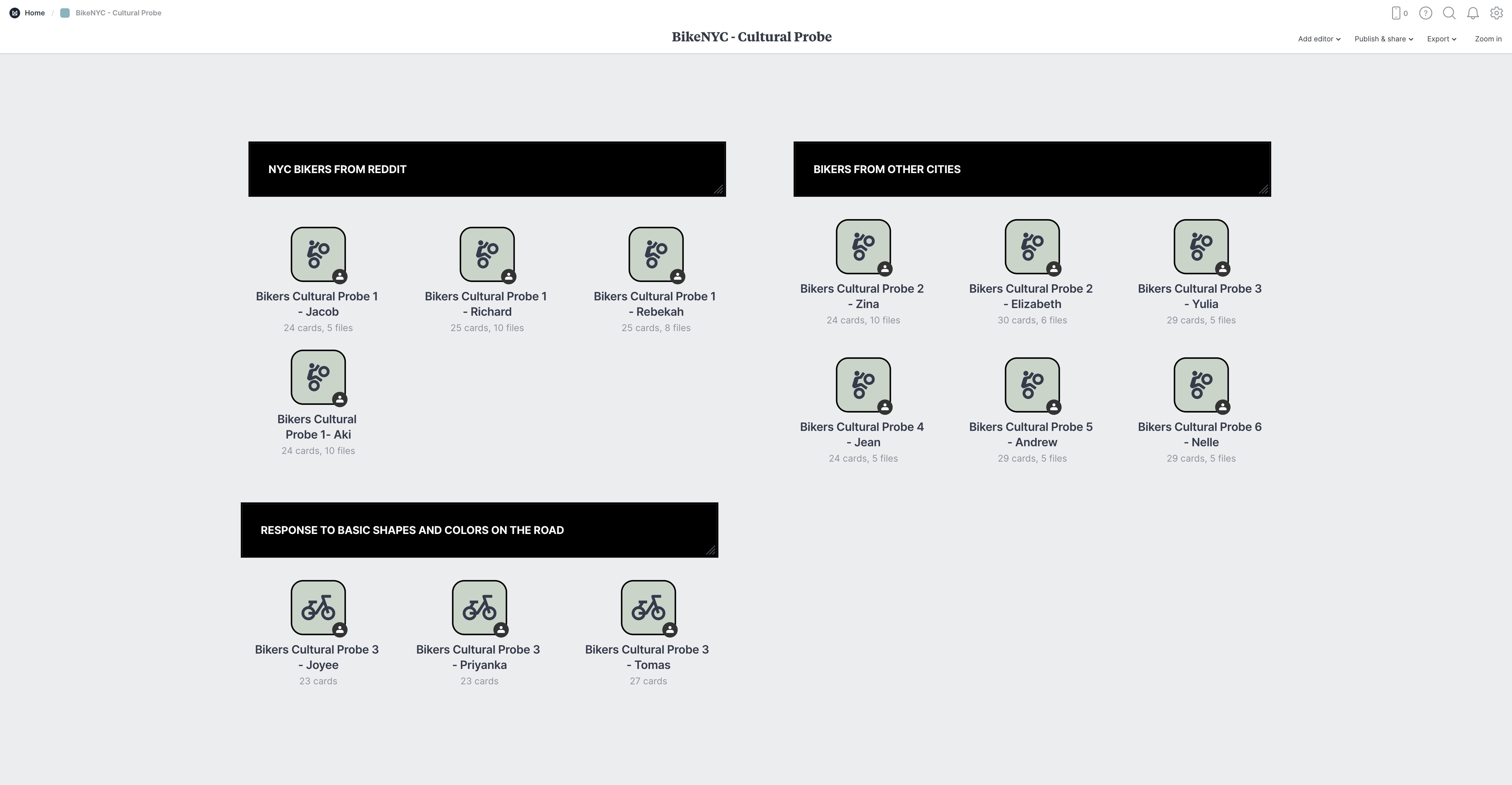 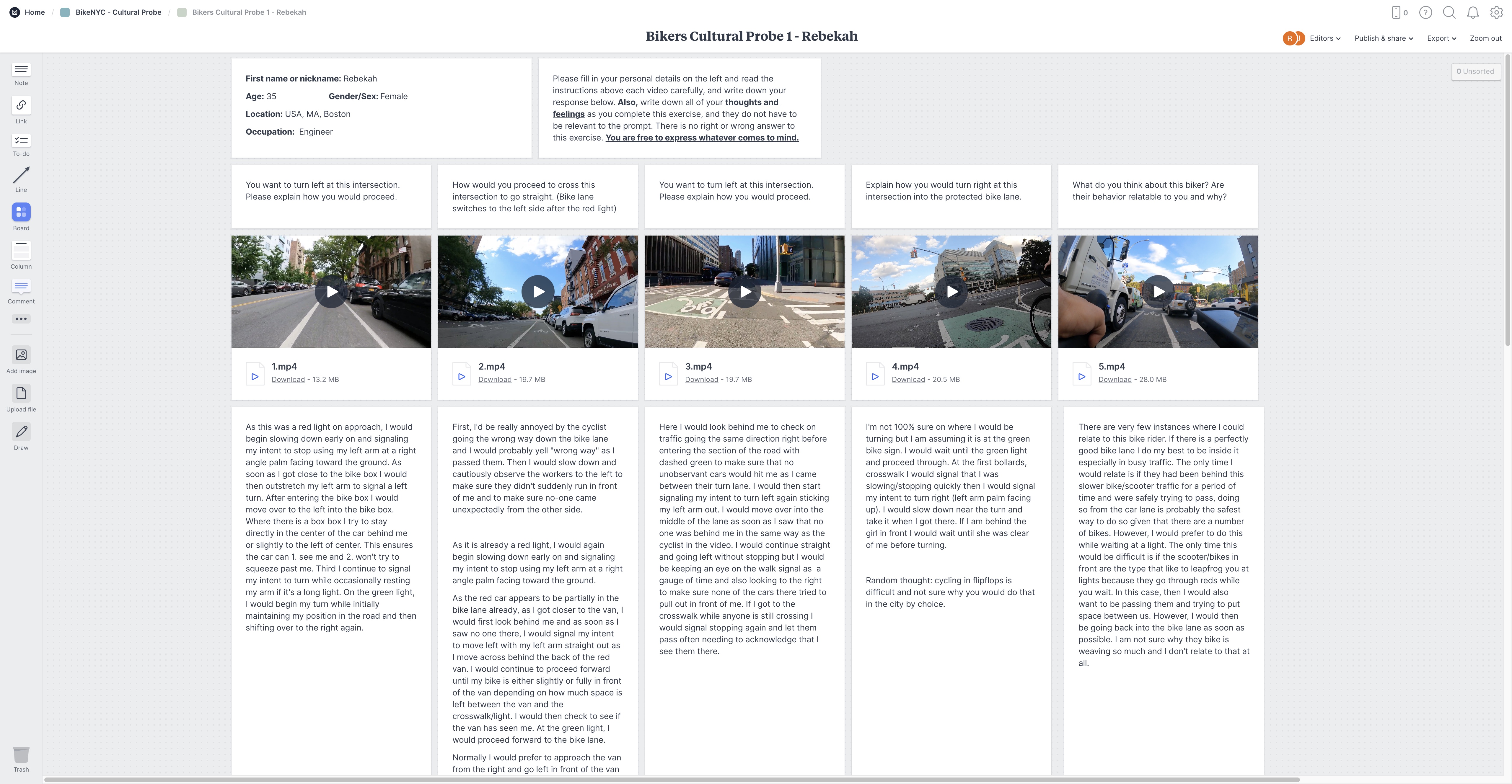 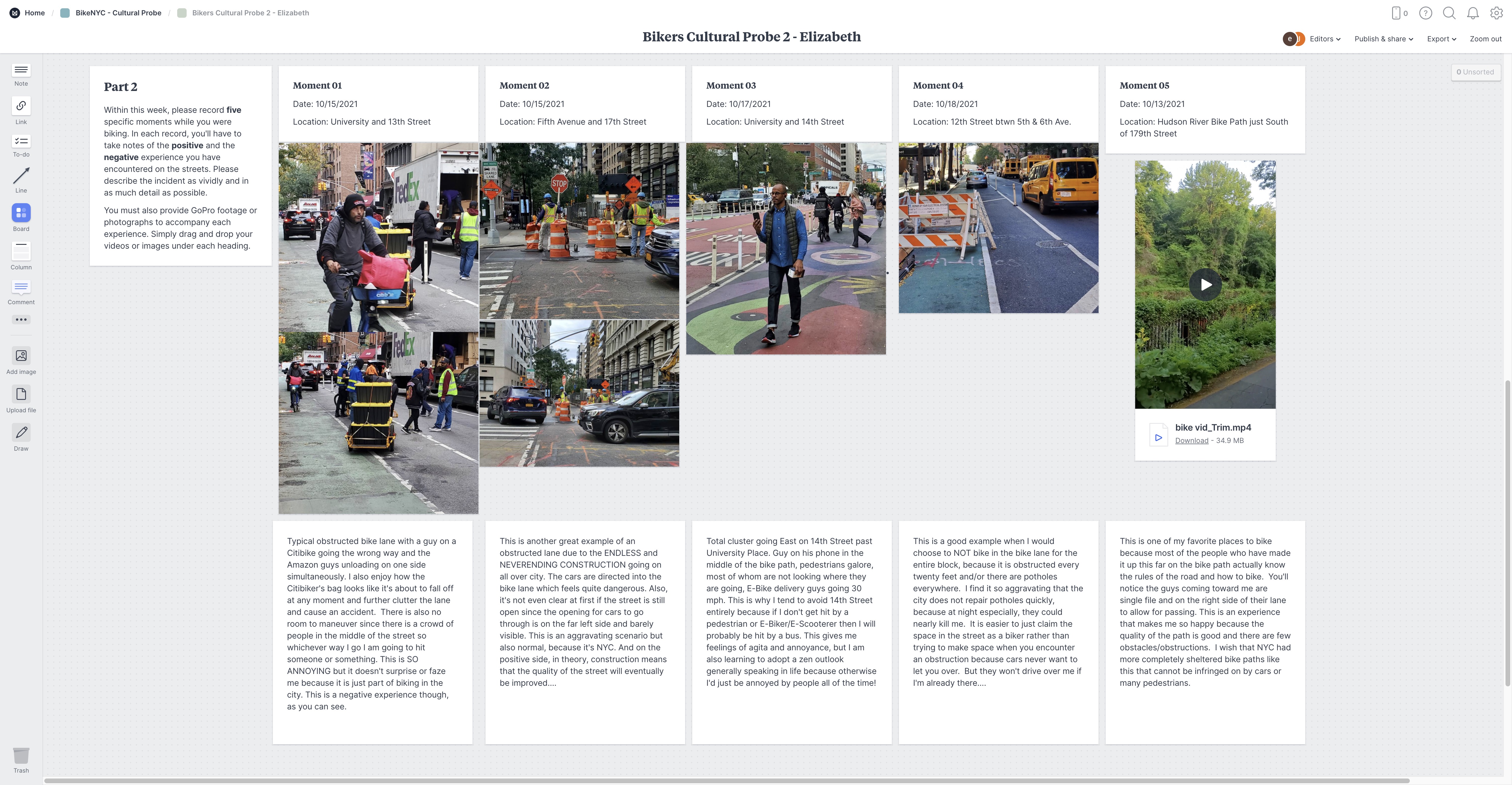 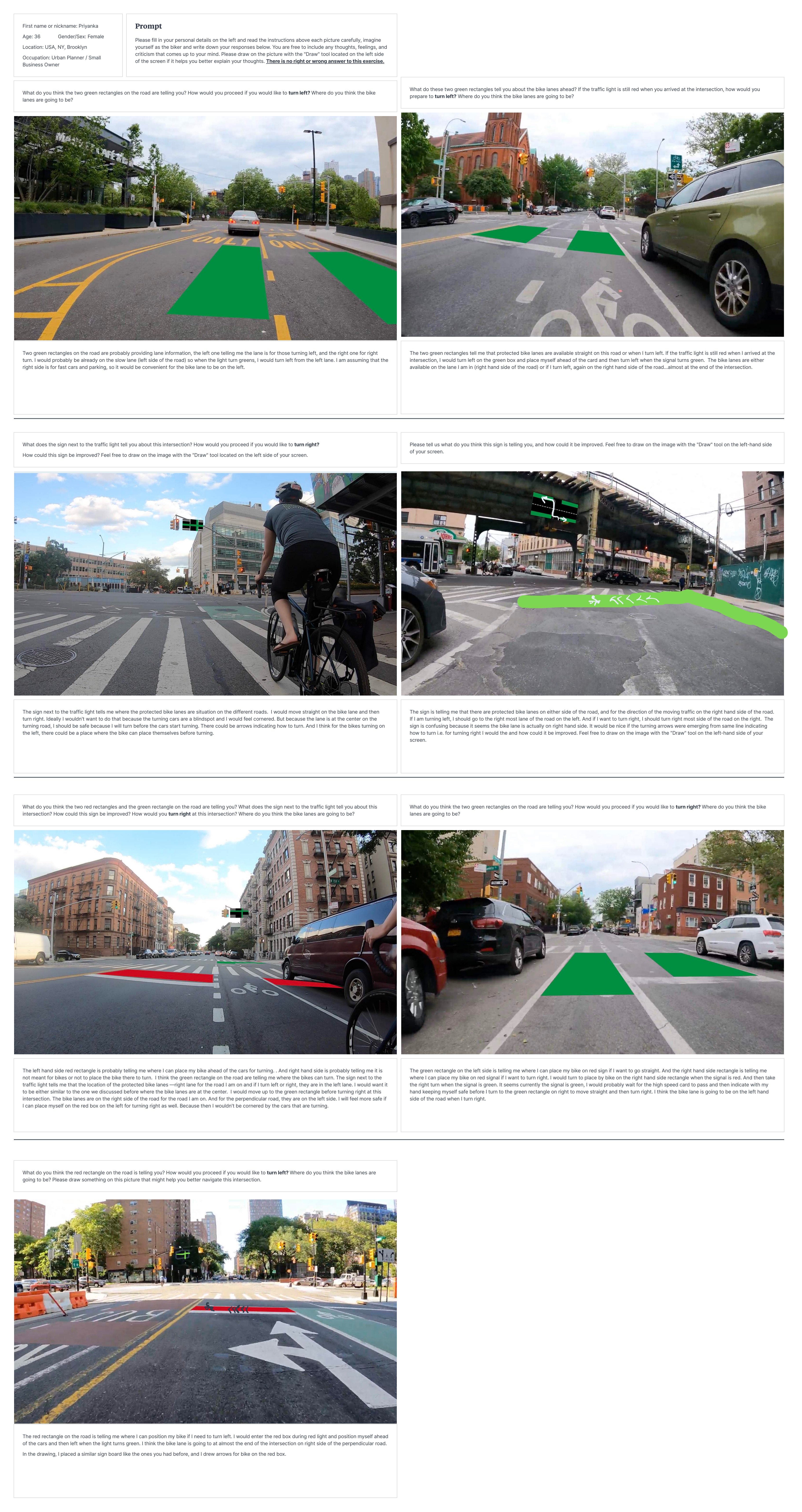 After two rounds of interviews, hours of user observations, and three sets of cultural probes, I synthesized my findings into four categories. The first is the perception which could be tackled by redesigning road wayfinding systems or sensory devices which might assist the user in interpreting surrounding stimuli into helpful information. Another point to consider is predictability in which we can improve by implementing a highly intuitive design as part of the bike lane system. It might also benefit cyclists to have a headlight that could project a navigation arrow onto the road to notify surrounding drivers. Similarly, presence is another critical problem for cyclists, pedestrians, and drivers. Bicycles allow for a lightweight and agile experience, but at the same time, it means that their smaller footprint and high speed could evade drivers' sight unintentionally. Thus, anything that amplifies their presence, whether visually or auditory, will help drivers notice them on the road. Lastly, what interested me most was the mismatched perspective between individual users. Problems arise when people disagree on how to navigate in the same space. While educating them could eliminate some misunderstandings, we learned from the statistics that road accidents usually occur due to drivers' or cyclists' intention to break those rules. So what we are lacking here is empathy for each other. As UX designers, we are taught to value human-centered design and trained to empathize with our audience. This skill should not be limited to designers but should be encouraged and normalized in the population for the betterment of society. 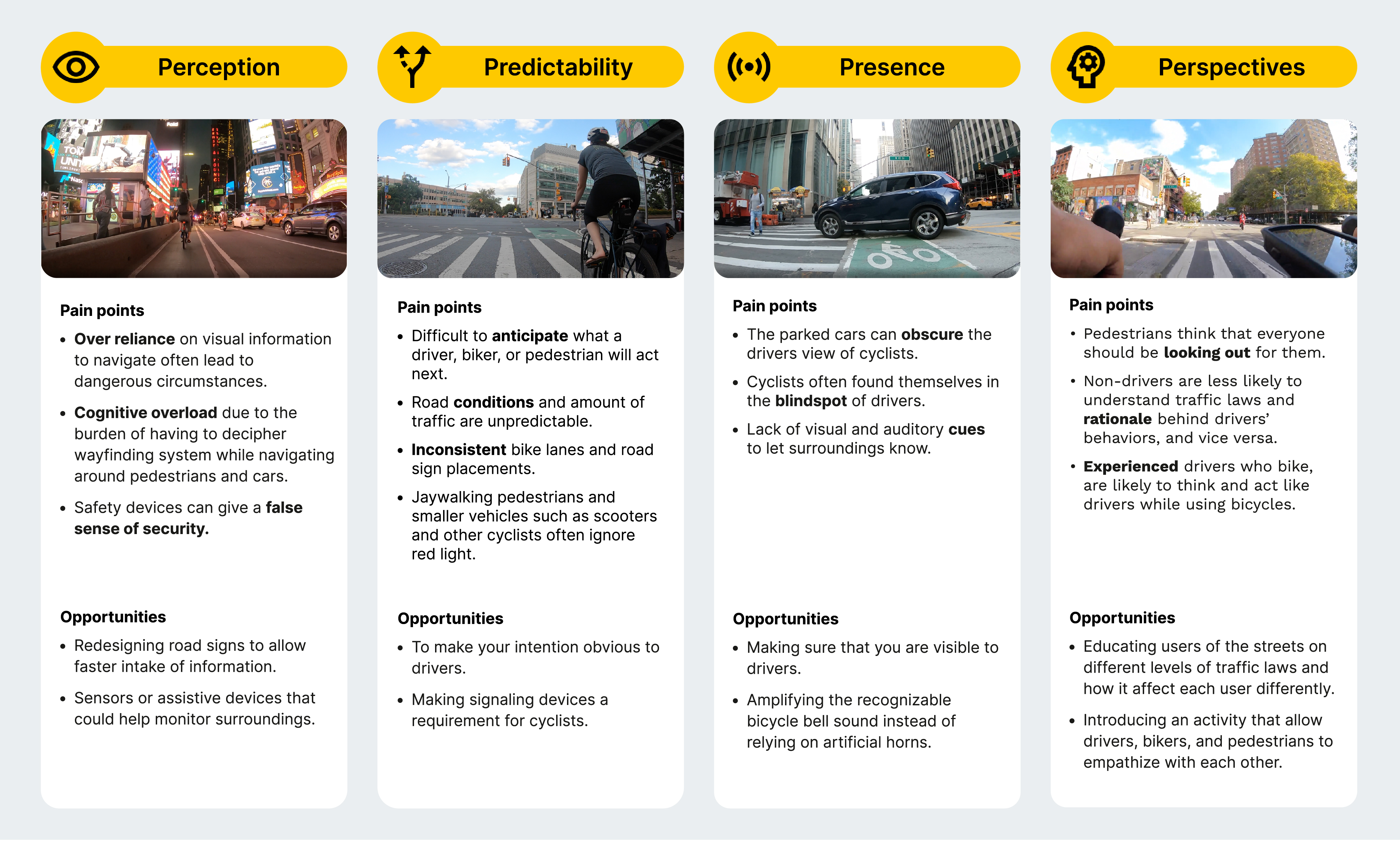 While I could think speculatively of technologically advanced design solutions such as visually responsive bike lanes or adaptive signal lights when bikes lean to either side, the research required for these products could take years or decades before it becomes practical. Not to mention how many people would protest against imposing a biking license requirement. Nevertheless, many people's lives are at stake here, so the problem requires an immediate response from all of us. Hence I turn to the power of social media using Spark AR to create an interactive experience that aims to raise the public's awareness of bike users. Without any prior knowledge of game design, I researched AR game mechanics and proposed core components of the game to be as follows:

Although I designed this game to contribute to the well-being of the cyclist community, they are not the end-user of this design. Instead, I distributed the game to another group of participants which do not bike at all without giving them any context at all. This is to test whether they could empathize with New York City's bikers or how can I improve the experience to do so. I asked six of my participants to record the gameplay and write down their thoughts and feelings about the experience. Apart from minor bugs and technical issues, the simplicity of the game allow them to quickly grasp what it must be like to bike in New York City. Through this act of empathy, they will think twice before jaywalking or driving more carefully around cyclists next time they're on the road. Most of my participants also mentioned that they enjoyed interacting in the game with another family member or friend. Some suggested that I am heading in the right direction but I should add some more animated graphics and sounds to be more entertaining. 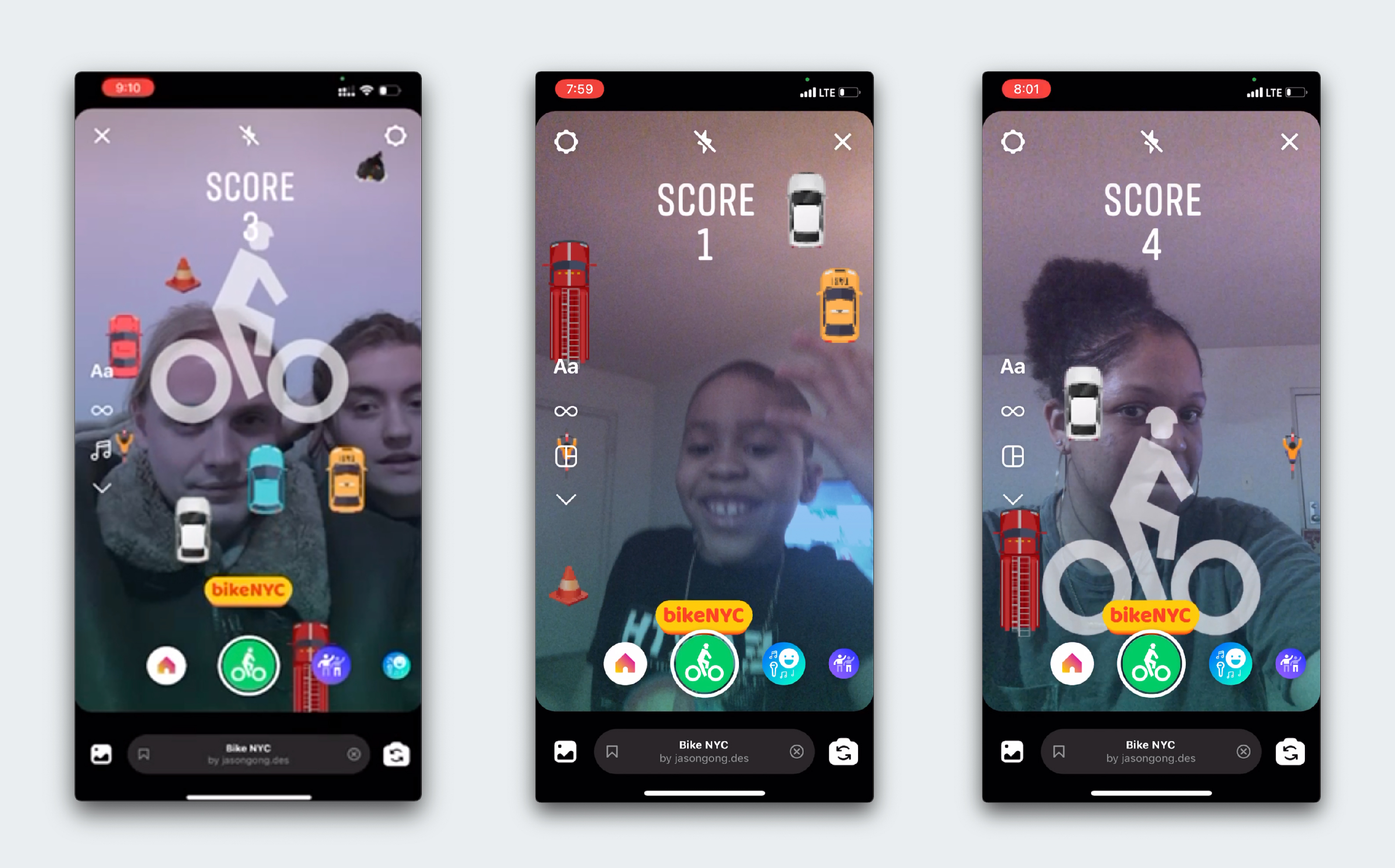 This project gave me an excellent opportunity to apply my design skills to non-traditional design problems. Although we live in an age where digital products are highly in demand, designing an app to solve a problem has become a norm. However, being confined to conventional UX research might be counter-productive in some circumstances, especially in this case, where a direct intervention might not be feasible due to time and financial constraints. I tried to look at the problem holistically and search for solutions beyond the digital interface and high-tech wearables. As a result, I managed to transform people's behavior from the inside, as opposed to adding more physical constraints or taking away their personal agency, creating a much more sustainable solution in the long term. 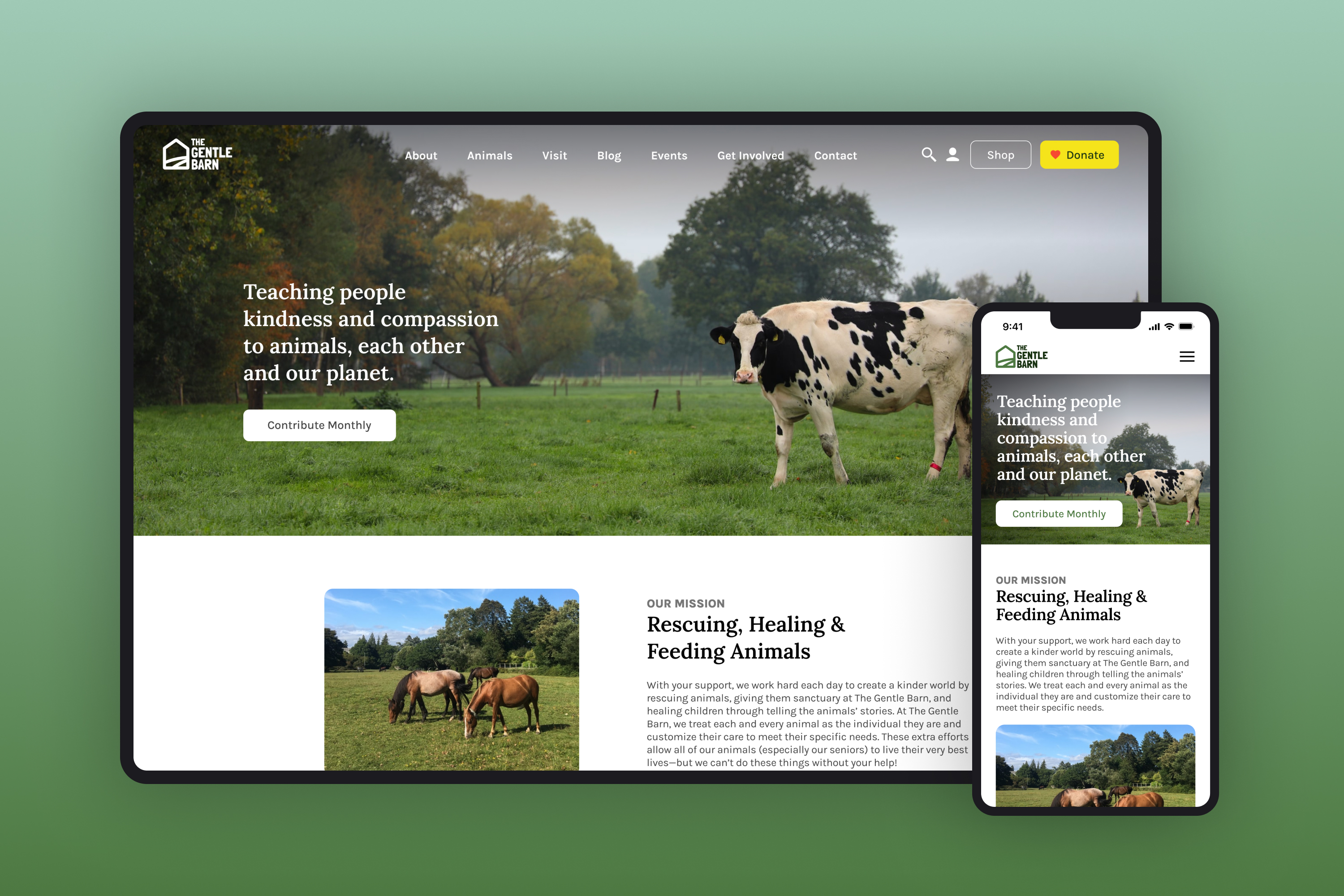 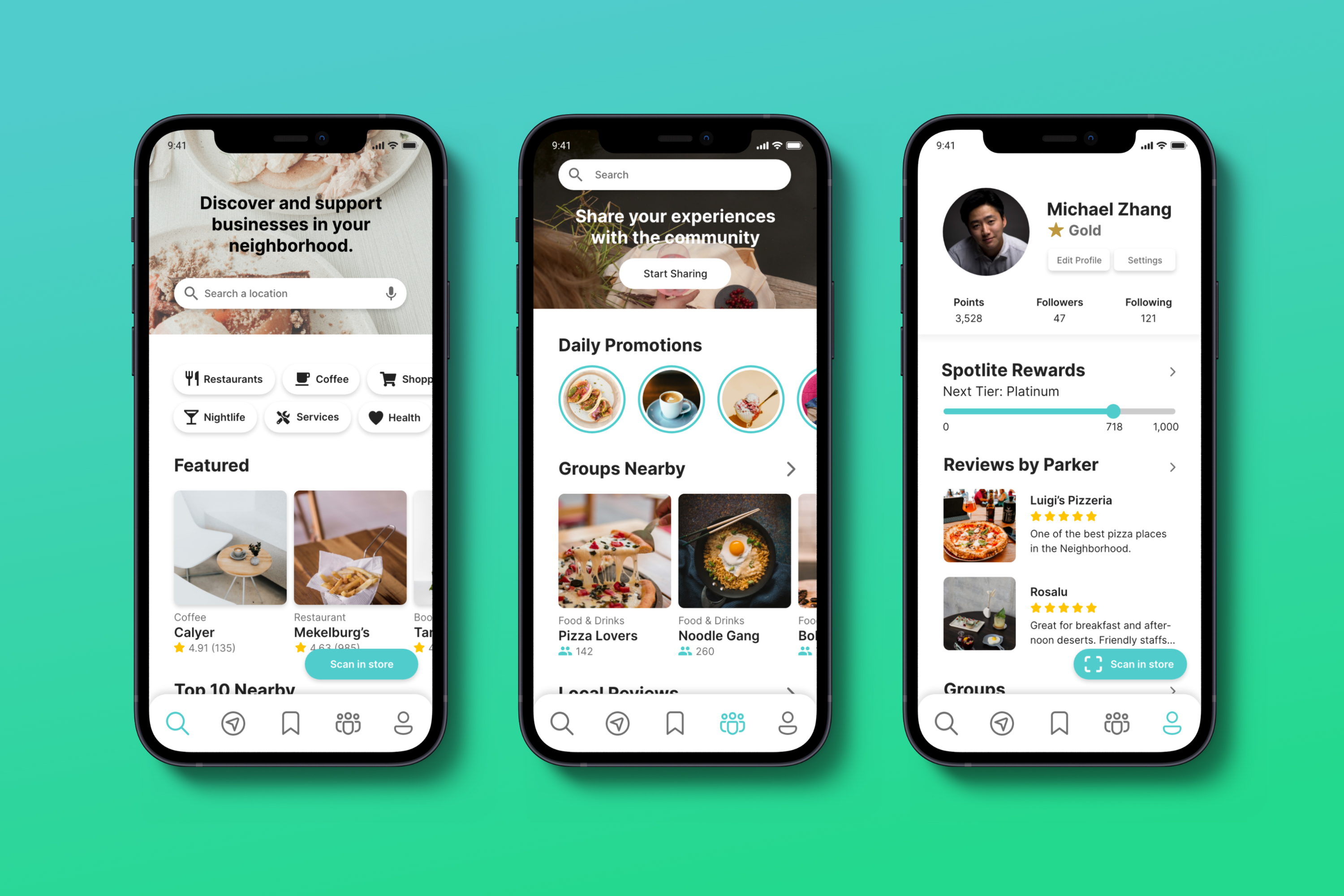 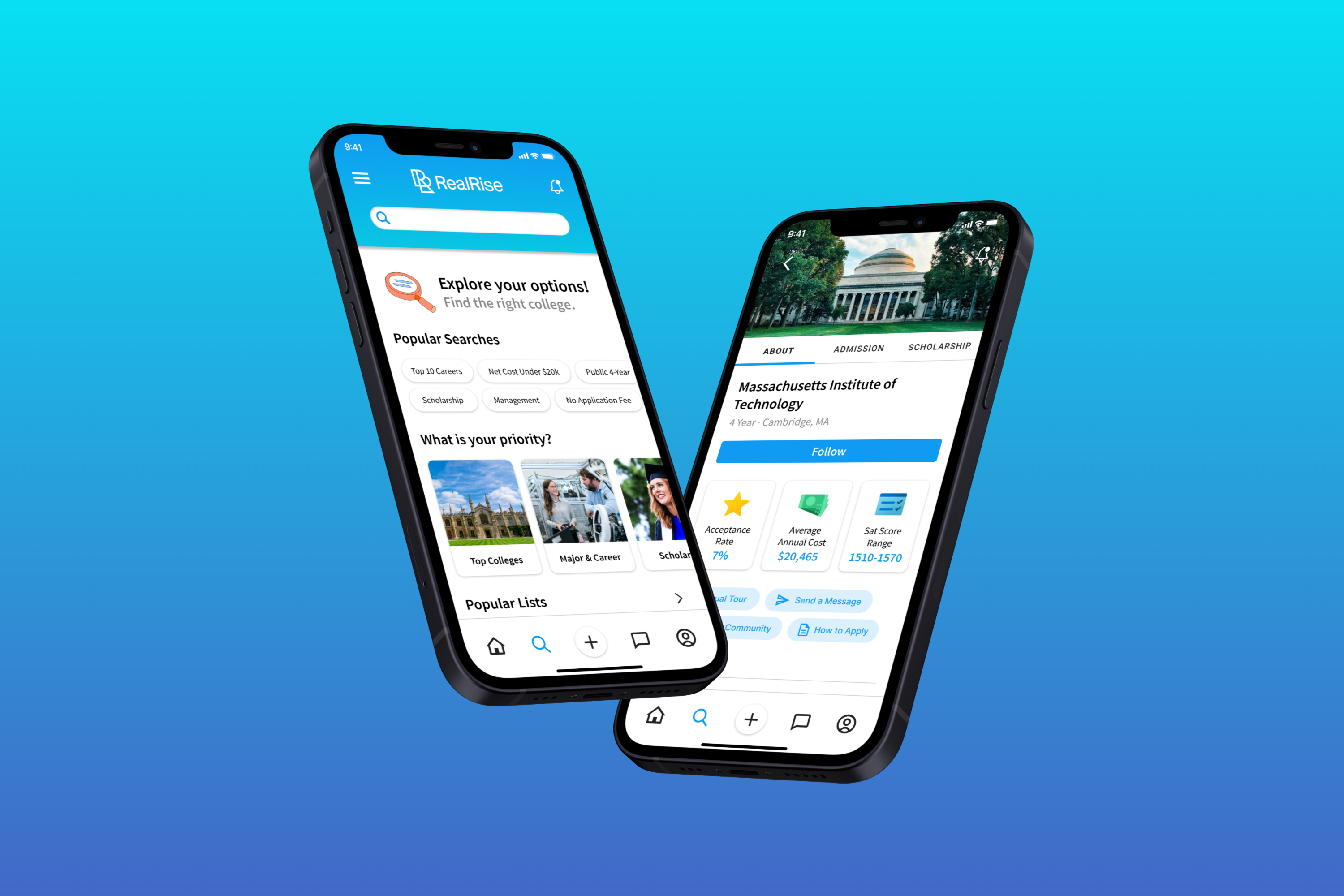